Skip to content
The Paris march was dominated by railway-workers

A public sector strike has forced the cancellation of thousands of flights across France in the biggest labour challenge to the centre-right government since its election in June. Air strike traffic controllers joined postal workers, bus, metro and train drivers, hospital workers and electricity and telephone utility staff in marches through major cities.

Only one in five flights has been leaving Paris airports with action due to continuing up to 06:00 (05:00 GMT) on Wednesday.

The mass protest has been called by unions angry at government moves towards privatization, pension reforms and spending cuts.

BBC correspondent Valerie Jones reports from Paris that the demonstration was so large it took more than two hours for all the protesters to leave the starting point for the air strike.

Police counted 30,000 demonstrators marching through the Left Bank to the beat of drums under union banners, letting off coloured flares in the November gloom.

Union officials put the figure closer to 60,000 and several thousand demonstrators also took to the streets of the second city, Marseilles, and the technological powerhouse of Toulouse.

One demonstrator in Paris told the BBC that the future of flagship state companies like the rail network, the SNCF, was at stake:

“We don’t want the SNCF becoming like the British railways.”

But the new French government remained unswayed by Tuesday’s mass protest as one MP with the ruling party, Herve Mariton, told the BBC:

The biggest disruption was to airports, with all but long-haul flights badly affected.

France’s civil aviation authority (DGAC) said it could guarantee that only about 500 of some 4,300 scheduled international flights would depart as planned.

The action affected other parts of Europe as flights from Spain and Amsterdam’s Schiphol airport were diverted to avoid French airspace, and flights from Geneva to Britain were delayed.

Morning commuters in Paris were forced to walk the last 250 metres (yards) into the busy Gare du Nord station when their trains were caught in a bottleneck caused by industrial action.

While rail and bus services in the capital appeared to stabilize by the afternoon, the disruption was much more severe in the provinces with no buses running in Bordeaux and only 5 % in Marseille, where a metro strike also caused chaos. 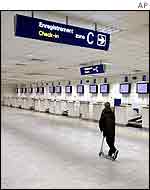 French lorry drivers, meanwhile, appear to have largely abandoned their blockade campaign, although two of the unions involved insist they have not given up.

Police broke up several protests on Monday, detaining drivers or threatening to confiscate their driving licences.

On Tuesday, a few fresh blockades were reported, but correspondents said the government’s policy of clamping down early on the blockades appeared to have worked.

The leaders of France’s two biggest unions, the CGT and the CFDT rounded on the leader of the other big union, Force Ouvriere (FO) after it pulled out of the strike on Monday.

CFDT leader Francois Chereque said he was “stupified” by FO tactics and accused FO leader Marc Blondel of short-changing drivers in a private-sector dispute while backing strikes in the public sector.

Have you been affected by the strikes? Tell us your experiences using the form below.

Workers all over the world should learn from French workers. They achieved 35 hours of work per week. If workers in other countries had similar rights and conditions, we would have a better world, eliminating those greedy US managers who pocket multimillion dollars while firing the so-called redundant. In Japan, we have “service overtime” where workers work overtime without getting paid. This is pure injustice. It is true that when workers strike, other people may experience some inconvenience but in the long run, we benefit from those actions by workers. As a matter of fact, because of the air controllers’ strike, my trip has been postponed one day. But I am glad to suffer, because of the good they are doing for me in the future. As for privatization, just look at what has happened in Argentina. Workers were fired after privatization and now more than one out of five are unemployed, and more than 50% of Argentinians are below the poverty line.
yasuyuki tateishi, Japan

If people in this country had stood up against the privatization of utilities and transport, then maybe OUR national infrastructure would not be such a mess now!
Paul, England

Unbelievable – the French strike at the same time every year. You’d think the French Govt would learn to anticipate their move and sort out the problems before they get to this stage.
Matt Cooke, UK

The strikes have made me late for work two days in a row this week so far. I waited 40 minutes for a train where the people were packed in like sardines. Perhaps they need to consider safety a bit more? I have no idea what to expect tomorrow morning. Do I wake up for work 3-4 hours in advance to maybe secure a train or do the normal routine and hope the train will be on time? The cost to businesses must be astronomical. The transportation industry is too strike-happy. Maybe it’s time for private companies to take over?
Kim, France

I am glad to have my job. The pay is acceptable, and if I am lucky, I will get a 3% raise this year. Drivers in France want a 10% reduction in hours and more pay, or else they will continue to blockade roads? Do they realize what is going on in the world? Probably not. Yes, I guess they can protest by blockading roads, and I hope they feel proud. I will protest them and the country by NOT travelling to France on vacation. Maybe they will just lose their jobs when enough tourist dollars disappear.
Peter Surmanis, United States

There needs to be a fundamental change in the psyche of the French worker. Europe can no longer tolerate them behaving like spoilt brats and holding everyone else to ransom. Whenever there are necessary changes in the economic practices brought about by the liberalization of market forces, for the benefit of the EU as a whole, the French will always stamp their feet if it is not of direct benefit to them.
Oliver Jacques, Luxembourg

I have the greatest respect for the determination of the French to be heard… If you believe in something, a small sacrifice of no fuel for a couple of weeks is nothing, food lorries always get through and you can always cycle there! When the fuel strike began to affect the government in the UK people caved in and you are still being penalized for it in rip-off Britain!
Sarah, France

It took me almost an extra hour to get to work this morning. Of course, this sort of thing won’t happen once the Metro is run by a private company that actually keeps it running properly every day. I’m sick of overpaid, striking, whingeing French civil servants. They have made strikes entirely meaningless.